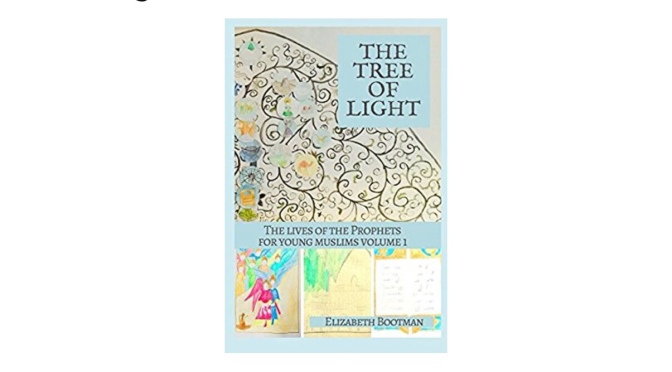 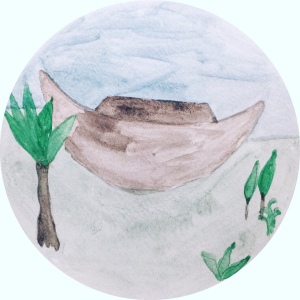 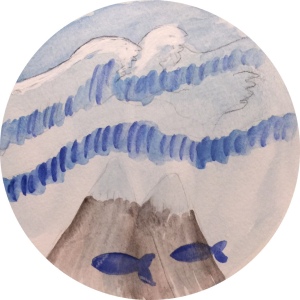 Nuh (a) had one son named Kenan who could not believe his father’s prophecy and so did not follow him.  The rain drops fell like millstones, the waves came like mountains, and the son of Nuh (a) was among the drowned.

When Iblis was discovered aboard the ark he told Nuh (a) that his nation would be destroyed by 5 things, 2 of which he named, greed and envy.  Iblis said that he had been envious of Adam (a), and Adam (a) had been greedy to eat of the Tree of Knowledge in Eden.

There were 3 animals created on the ark.  When Nuh (a) stroked the elephant, it sneezed and the pig was created.  This pig consumed all the dirt on the boat so that it was kept clean.  Iblis stroked the back of the pig and the rat was born.  Nuh (a) stroked the back of the lion and the housecat was born to control the rats, but not before they had gnawed a hole in the hull of the ark.  The snake stopped the hole with its tail and so saved the ark.

“Was it a rattlesnake?” asked Sulayman.

“I do not think so,” replied Grandfather.

“Was it a cobra?”  asked Sulayman.

Yusuf swayed from side to side like a cobra and Grandfather laughed.

When the rains had stopped Nuh (a) sent the crow to search for dry land, but the crow found a dead animal, or some say the son of Nuh (a), on a mountain and did not return.  So Nuh (a) sent the dove.  The dove found an olive tree, but its legs touched the Sea of Wrath while taking the olive twig and the feathers fell off and the legs turned red.  Nuh (a) blessed the dove when it returned and cursed the crow. 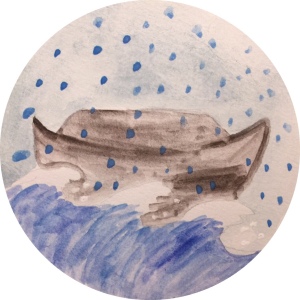 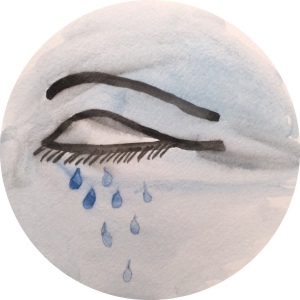 Nuh (a) knew that the sign of the flood being near would be that water would gush up from the bread ovens.  The unbelievers did not see how that could be in a land with no rain.

When the sign appeared the boarding of the ark began.  The animals boarded the first tier of the boat.  Iblis took hold of the donkey’s tail to stop him and Nuh (a) urged the donkey to get in by calling him a “damned one.”  In this way Iblis was invited onto the ark as he is damned indeed.

The human beings boarded the second tier of the boat and the birds boarded the third tier.  There were 80 believers and the family of Nuh (a) who boarded the ark.  After the doors were closed water came from above and below.

Last year for Ashura we had a party with sweets and the children made animal cookies two by two for the ark of Nuh (a).  If you have ideas for this year’s celebration please share them with us.

First we made sugar cookies with animal cookie cutters.  Then we added the first layer of icing. 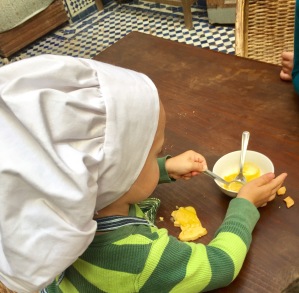 Then we added the faces and other details. 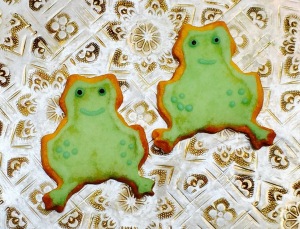 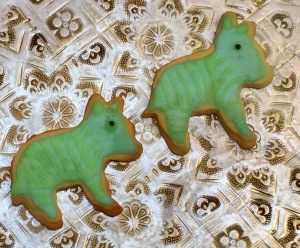 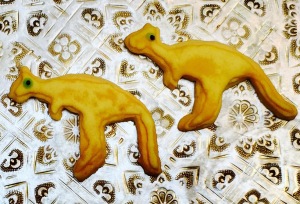 We also had cupcakes with these laser cut animal cupcake wrappers. 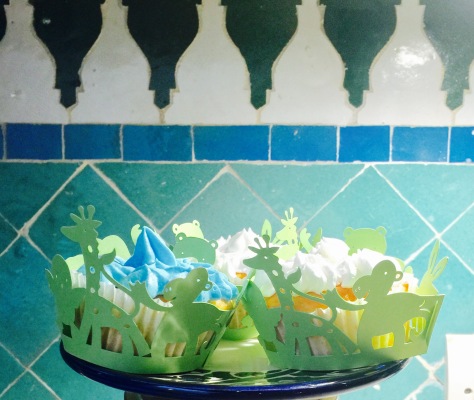 We are hoping to repeat the activity next year because the children enjoyed it so much and their cookie decorating went much better than we anticipated.

Please share your ideas for celebrating Ashura with children.

This is a project from one of our contributors.

First they drew a boat outline and then glued the popsicle sticks down.  Them they glued little foam animals down on the ark from Michael’s craft store.

This craft would be ideal as a preparation for the Ashura holiday.

If you would like to read the story of Prophet Nuh (a) to your child with this craft there is a chapter concerning him in My Little Lore of Light by Hajjah Amina Adil. 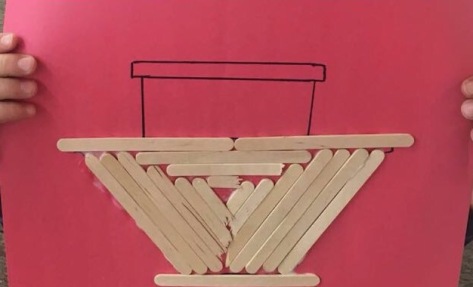 Please share your ideas for creative projects to learn about the lives of the Prophets.

This year for Ashura I was able to find Waldorf style dolls for Nuh (a) and Musa (a).  I used animal figures and a nested wave set to depict the flood and the parting of the Red Sea that coincides with the Asura Holliday.
We gave the pieces as gifts for Ashura. 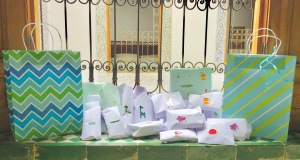 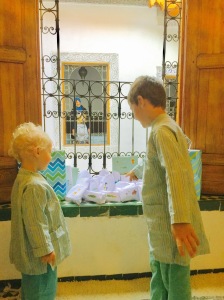 We used the nested waves to show the parting of the Red Sea.

We used animals in pairs, a nested wave set and a Waldorf Doll for this arrangement to learn about the story of Prophet Nuh (a).

This year my sons received The Animals of Paradise book by Karimah Sperling.  I hope to read this book with the children soon and post the review.

The boys also received a book about Prophet Nuh (a) called Noah’s Ark by Lisbeth Zwerger.  I hope to read this book with the boys soon and post the review. 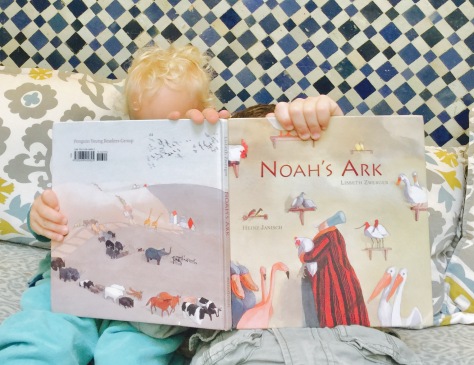 ​​
Please share your ideas for Ashura gifts and using creative play to celebrate the occasion with children. 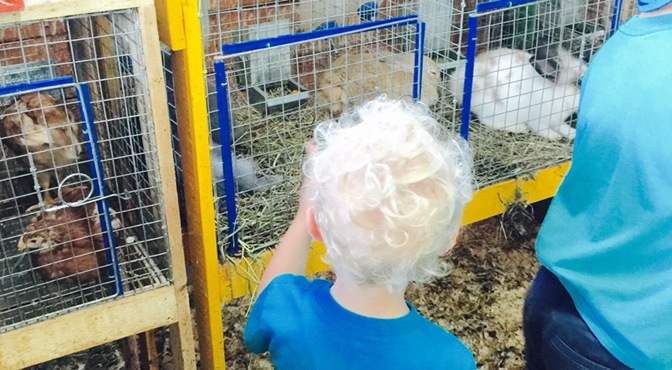 An ideal activity with children for the Ashura holiday is a visit to a petting zoo if possible to give the children a tangible experience with animals.  We visited a local farm.

The bunny encounter was very special because the boys were allowed to hold the animal.

I do not think I have ever seen a mama chicken with her chicks in person before now. 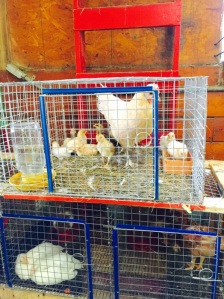 The boys were excited to see a peacock. 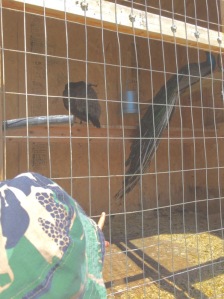 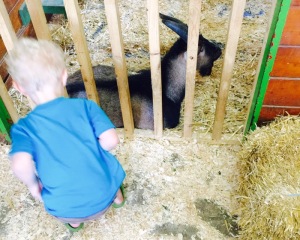 Please share your ideas for celebrating the Ashura holiday with children. 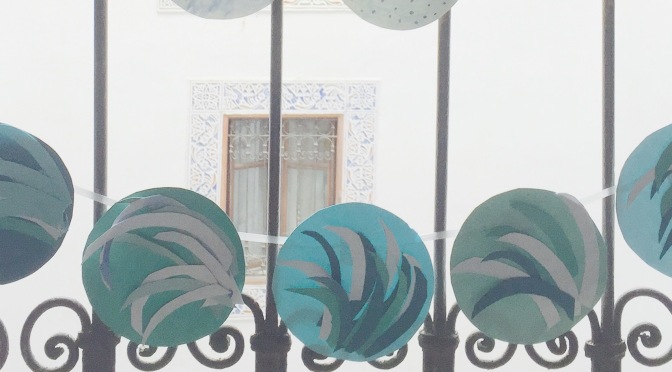 This year we added a garland to our Ashura decorations featuring the flood waves from the story of Prophet Nuh (a).

If you would like to read more about Prophet Nuh (a) to your children there is a chapter about him in My Little Lore of Light by Hajjah Amina Adil.  This story is also part of our Illuminated Quran Curriculum at this link: 71. Illuminated Quran: Nuh.

First we made medallions for each wave in graduating darkness before the waters subside for Ashura in the final piece.

We glued pieces of colored paper in layers to represent the waves. 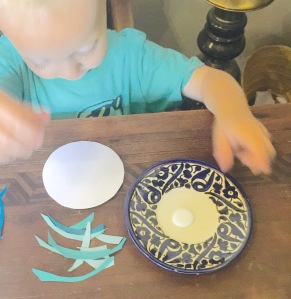 Then we strung the pieces together to represent the profession and end of the flood for Ashura.

Please share your ideas for celebrating Ashura with children.

We are really hoping to have a drumming class next year to prepare for the holiday.

Our ingredients for Ashura pudding.