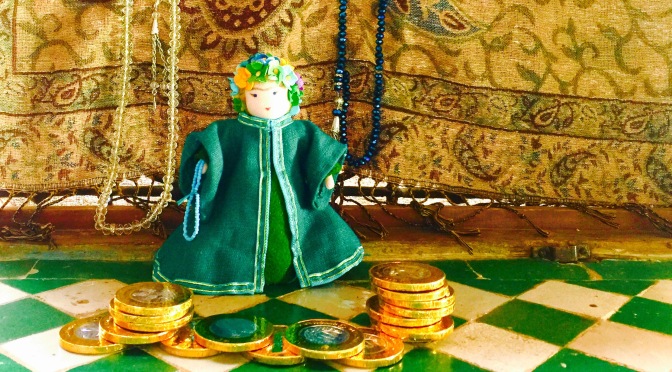 Tonight we read the story of Ali Baba and the 40 Thieves in Tenggren’s Golden Tales from the Arabian Nights.

In this story there is a cave full of fantastic treasures and it had a magical door.  My son asked me what the door was and I told him it was a rock.  The magic to open the door was “Open Sesame” and my son wanted to know what sesame is and I explained that it is a type of seed.  He wanted to know why they didn’t just say “Open Seed?”  I explained that it is  a type of spell and you have to use the right words not just any words.

When the 40 thieves find the house of Ali Baba they hide in the courtyard inside jars and wait to hear pebbles fall on the floor.  My son wanted to know why the pebbles were thrown into the courtyard and I said this was the signal for the thieves to come out of hiding.

The clever slave girl Morgiana recognizes the chief of the thieves and she stabs him with a dagger.  My son wanted to know if she killed the thief and I said yes she did.

Please share your ideas for sharing the literature of the Muslim world with children.